Sixty Five in Comeback Class! | Mike Whalen '87
​We’re back at Syracuse University in a really big way.  DU Headquarters’ on-campus recruiters, Jacob Ellis ’16 (Purdue) and Hayden Rahn ’16 (Oregon), have built a return class of 65 "Founding Fathers". Up in Syracuse for the November Dikaia Annual Meeting, Rick Holland '83, Kevin Stein '83 and I had dinner with the NGs at Panda Express on Marshall Street (Panda Express is next to what was the Generic Bar in the early/mid 80s).  Our Founding Fathers are very good guys.  At dinner, I sat with 8 NGs.  We talked effortlessly the whole time.  Lots of laughs.  Keeping with our Founding Principles, my table was very diverse in backgrounds, majors, interests and ethnicities.  It was fun to listen to the NGs talk about the colony executive offices each wanted to go for.  They asked about old traditions and I told them about ending Chapter Meetings with Boner/Bonus of the Week, passing the gavel so everyone can have a say, and belting out Two Rivers making the walls shake; the DU Rules of Etiquette; Black Label and all that’s swell that goes along with this swill; Pledge Pranks; 711 Open Parties; Pledge Tests; Paddle Talks; and so on.  Eyes were wide, big ‘ol grins around the table.  Good time.  We’re off to a great start.
Delta Upsilon Tailgate Supreme Update |Dave "Sarge" Sugrue '90
On October 1, 2016, 78 Brothers and their families came together in camaraderie and friendship at MetLife Stadium where Syracuse football hosted Notre Dame. Brothers came from Washington, Florida, Virginia, the District of Columbia, Maryland, Massachusetts, Connecticut, Rhode Island, New Jersey, New York and even far away Chile (thanks Brother Bruce Willett)!  We hired Mancave Events to cater the event.  Mancave put on an outstanding spread and its tailgate trailer opened to reveal not only 3 flat screen TVs, but even its own restroom and two beer taps.  While other tailgate parties had to line up and wait at the reeking public Johnny-on-the-Spot portapotties, we had a DU-exclusive, executive-style washroom that was available only to our party.  Never underestimate the importance of an executive washroom at a tailgate! 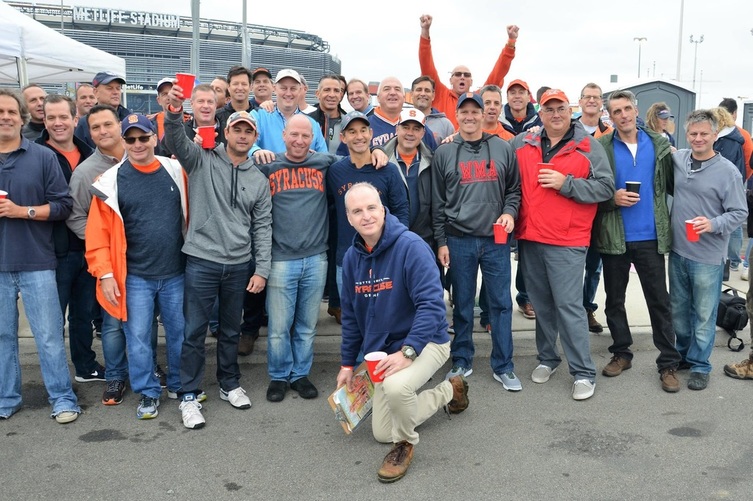 Brotherhood at The DU Tailgate Supreme
​The experience of a keg party was the first in decades for many Brothers and the rust showed.  For example, after we tapped the first keg, it yielded nothing but foam.  A debate broke out as to possible countermeasures.  While he forgot the exact technique a few decades ago, Brother Bob Vrooman ’89 swore that putting your left leg up on the keg while you poured with the right hand was the fastest way to eliminate foam.  Others volunteered that the tap pumping technique was the key to getting rid of foam:  one slow pump followed by two fast pumps.  While no consensus ever emerged, Bob shared one gem of keg beer dynamics:  “Look, you may disagree with how the keg should be tapped.  But you can't disagree with the fact that when you control the tap, you’re the king, the KegMaster.  At big keg parties at SU, he who held the tap held the power.  Eventually everyone would come seeking the blessing and a refill of beer from the KegMaster.  The KegMaster had the opportunity to strike up conversation with every pretty girl, to aid every friend and deny any beer to any pains in the ass who showed up.  When you had the tap, you didn't have to go to the world.   No, no, no!   The world would come to you!”
So, while Syracuse lost the game, I felt I won.  This event was a ton of fun.  It brought us one step closer towards realizing our dream of bringing DU back to Syracuse.  I’d like to think this Tailgate event will be a new tradition.  Next year will be bigger and better!

​Editor’s Note: Larry Richmond ’90 gave Dave Sugrue ’90 his nickname as a pledge when “Sarge” took control of organizing a Sorority Wake-Up.  Well, Sarge is still at it.  Having done a great job single-handedly organizing the Tailgate, Sarge has soldiered on to putting together the Colonization Ceremony at the Hall of Languages on January 28th.  Sarge is doing a lot for the House.  Thank you, Dave.
​Next All-Brotherhood Gathering: Recolonization Weekend!!
Syracuse NY | January 27-29, 2017

​GET YOUR TICKETS TO THE SU vs. FSU GAME
A large block of tickets has been reserved so that all 65 colony members and alumni can watch the game together.
To get your tickets, please visit the Ticketmaster website. When prompted, please enter the code DUSU16. Tickets are in Section 306 and 305. Cost is only $40 each.
Note: If someone needs seating due to limited mobility, they can sit in Section 103 which is directly behind the student section. 5-6 colony members have already offered to sit with alumni in this section Please send email to dusyracuse@gmail.com.

GET YOUR OFFICIAL SU/DU T-SHIRT
We have created custom t-shirts to be worn by alumni and new colony members. We will handout the shirts before the FSU game and the reception following the Recolonization Ceremony. To order your $16 tshirt visit this website.

LOOK WHO IS ATTENDING SO FAR:
Ken Berlin, Chris Calabrese, Larry Cantor, Brian Cleary, Steve Cowan, Adam DeMichele, Dave DeRobbio, Rick Donah, Steven Hochberg, Richard Holland, Ken Hyman, John Kellerman, Bruce Laidlaw, Mark Linnan, Pete Maescher, Phil Miller, Chris Naum, Dennis Nave, Jeff Ploshnick, Dave Plotkin, Greg Simon, Paul Simon, Kevin Stein, Dave Sugrue, Dick Thorpe, Michael Whalen, Dave Zimmer
RSVP TO RECEPTION
Howie Weekend 35th Anniversary | John Newhouse '82
Please contribute to our Return to SU Today
Alumni News
We’ve had a number of great submissions to our Alumni News page.  Send a paragraph or two on your life happenings to Mike Whalen at mwhalebones@gmail.com to be included in Alumni News.
Have interest in being an advisor to our new brotherhood? Learn how.
Have a DU memory or story to share?  Submit your story.
Do we have your latest contact information?  Update it now.
How You Can Help
There are many ways to get involved! Help organize and event, find missing Brothers, be an advisor to our new undergraduate brotherhood, make calls to raise funds, write a Bazoo article, etc. It's all up to you!   This website has an extensive FAQ, a list of missing Brothers, dozens of Bazoos, DU's history at Syracuse University and more!

Contact any of the Task Force members directly or email us at dusyracuse@gmail.com.